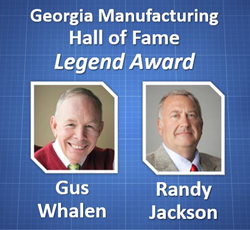 Janelle Whalen received “The Legend Award” on behalf of her late husband, Mr. Gus Whalen. The Gainesville business leader was the founder of the Featherbone Communiversity, the former CEO of the Warren Featherbone Company, and an author and speaker. The Communiversity is a partnership of local schools and businesses, and is home to the Brenau University Department of Nursing, the Interactive Neighborhood for Kids (INK), Lanier Technical College Manufacturing Development Center, University of Georgia Small Business Development Center, and the Georgia Tech Enterprise Innovation Institute.

Jamey Jackson received “The Legend Award” on behalf of his late father, Mr. Randy Jackson. For nearly a decade, Jackson was the public face of Kia Motors in Georgia, a $1 billion auto plant that created thousands of jobs and saved a working-class border community from economic ruin. This facility in West Point, Georgia was the first manufacturing site in North America for Kia Motors Corporation, and produces 360,000 units annually. It manufactures the Sorento CUV and the Optima mid-size sedan, two of the brand’s top-selling models in the U.S.