Posted By: Wesley Moss in GMA In The News, 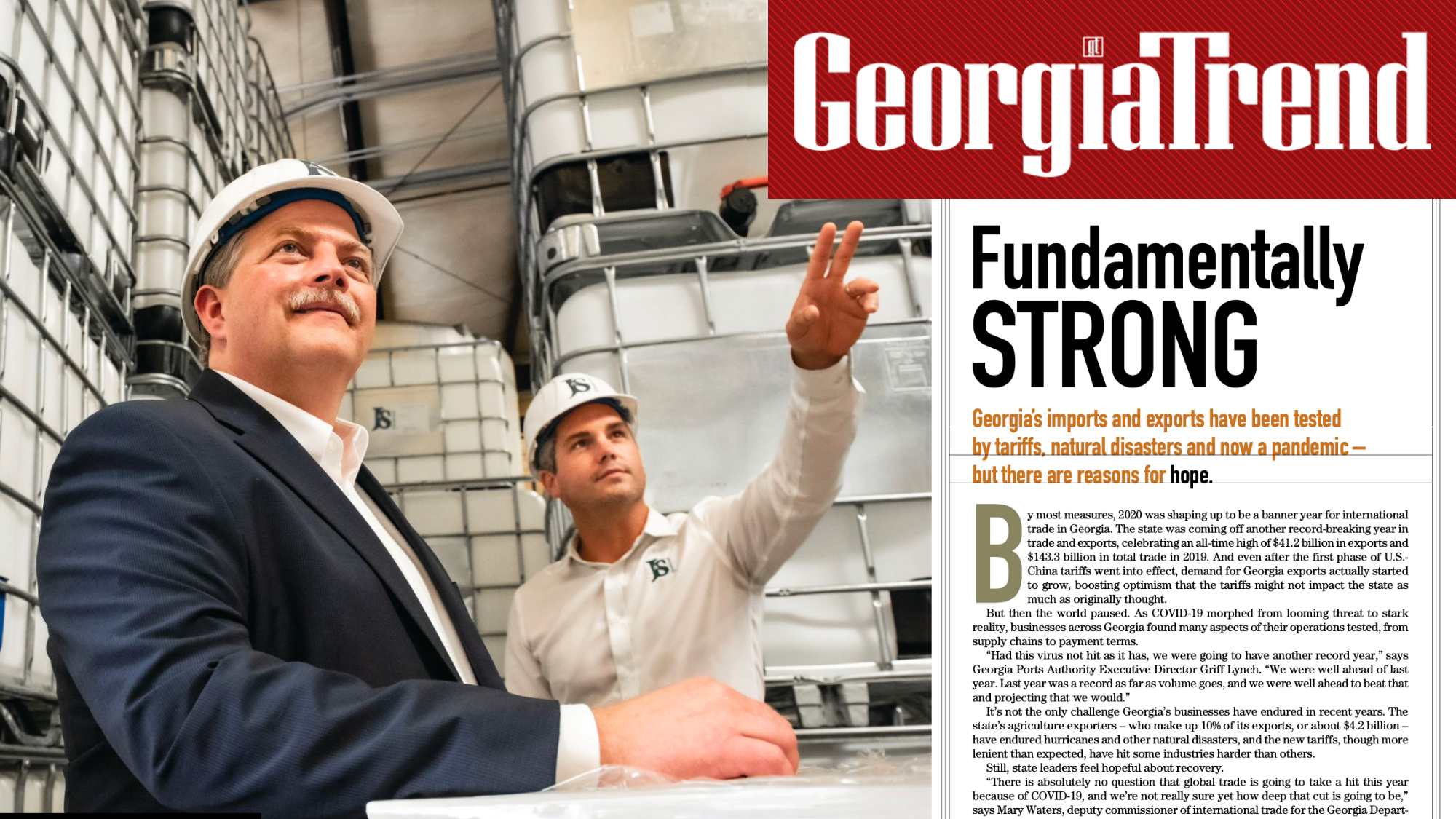 By most measures, 2020 was shaping up to be a banner year for international trade in Georgia. The state was coming off another record-breaking year in trade and exports, celebrating an all-time high of $41.2 billion in exports and $143.3 billion in total trade in 2019. And even after the first phase of U.S.-China tariffs went into effect, demand for Georgia exports actually started to grow, boosting optimism that the tariffs might not impact the state as much as originally thought.

But then the world paused. As COVID-19 morphed from looming threat to stark reality, businesses across Georgia found many aspects of their operations tested, from supply chains to payment terms.

“Had this virus not hit as it has, we were going to have another record year,” says Georgia Ports Authority Executive Director Griff Lynch. “We were well ahead of last year. Last year was a record as far as volume goes, and we were well ahead to beat that and projecting that we would.”

It’s not the only challenge Georgia’s businesses have endured in recent years. The state’s agriculture exporters – who make up 10% of its exports, or about $4.2 billion – have endured hurricanes and other natural disasters, and the new tariffs, though more lenient than expected, have hit some industries harder than others.

“There is absolutely no question that global trade is going to take a hit this year because of COVID-19, and we’re not really sure yet how deep that cut is going to be,” says Mary Waters, deputy commissioner of international trade for the Georgia Department of Economic Development (GDEcD). “But I do think those underlying fundamentals are going to allow Georgia to turn a corner once we’re able to come back from this. Those underlying diverse markets and just the business environment that Georgia has, those are going to still be in play when we come out on the other side of this.”

In an industry as interconnected and multifaceted as manufacturing, every single piece along the production line – big or small – is a potential weak link in the supply chain.

Think about a car, says Georgia Manufacturing Alliance (GMA) CEO and founder Jason Moss. What’s the most important part of a car? The engine provides the power, but what about the brakes? Or the steering wheel?

“We have found, through diligent study, the most important part of a car is the part that’s missing,” he says. “All it takes is one nut or screw or bolt or washer to stop production on a production line. … Any component that’s missing in that supply chain can lock it down. Having redundancy in the supply chain is a big deal.” (Supply chain redundancy involves maintaining excess capacity or backup to avoid disruptions.)

This is especially important for manufacturers in the aerospace and automotive markets, Moss says, which rely more on imported components in their manufacturing processes. And these are major markets for the state: Aerospace companies generated $10.8 billion in exports last year, making it the state’s top export industry – and making Georgia the nation’s fifth-largest exporter in the space. Automotive-related exports generate another $3.2 billion, mostly to Canada, Mexico, the United Arab Emirates and Germany.

It’s an issue that Canton-based J&S Chemical has had to pay close attention to. The company is an in-process specialty chemical manufacturer for metal car parts that exports to nearly 30 countries. It was hit by a raw material shortage three years ago, followed a year later by the trade war with China, one of its largest international markets.

“And then this year we have to deal with the pandemic and coronavirus. To be honest, it’s been hell for the last three years,” says Thomas Smith, the company’s director of global sales and marketing. “We would really like for business to flow a little bit easier than these last few years.”

The COVID-19 pandemic forced Smith’s team to closely track all aspects of operations, including multiple stops along the supply chain as the pandemic spread from China to some of the company’s European suppliers.

“We had to really tighten up our communication with everyone from a market aspect … and then also from our supply chain,” he says. “Under normal circumstances, they would say, ‘OK, everything’s normal.’ But then we’ve got to dig in further and probe and probe: ‘Well, where’s the material? How much material do you have? Do you have material in the U.S.?’ We really had to be prepared and be on our toes to make sure that we didn’t have any kind of disruption.”

Hartsfield-Jackson Atlanta International Airport has seen its own ups and downs as well. The airport had experienced 4% growth in cargo operations since 2015, until volume dropped from nearly 700,000 metric tons in 2018 to 640,000 metric tons in 2019. This drop was due primarily to the trade war with China, says Elliott Paige, Hartsfield-Jackson’s director of air service development.

The normal seasonal slowdown in Asia, remnants of the trade war with China and the pandemic caused air cargo volume to fall 9.6% in January, “but then in February, we noticed something very interesting,” Paige says.

“Air cargo grew by almost 1% over 2019, when typically we expect numbers to decline. The increase was attributed directly to an influx of air cargo charter flights with the first shipments of medical and PPE supplies used to battle COVID-19,” he says. “February 2020 saw an 11.23% increase in air cargo volume from January 2020,” and indicators predicted a similar trend for the following months, he says.

The airport’s cargo growth led to the need for increased capacity and operational efficiency – and initiatives to boost both. Back in March 2017, the airport introduced TruckPass, a staging system to alleviate roadway congestion in the South Cargo area and digitize freight loading and unloading processes. The airport has also expanded warehouse capacity with Cargo Building C, a 120,000-square-foot warehouse with 2,500 square feet of temperature-controlled space for perishable goods and pharmaceuticals. Worldwide Flight Services, its first lessee, began operations in the warehouse in late 2019.

“The major lesson we’ve learned is that we must build resiliency and efficiency in our operations and capacity to handle future changes in the industry,” Paige says. “Whether it is increased interest in Atlanta as a cargo hub, cyclical changes in international markets or a worldwide pandemic, we must be able to quickly adapt to those changes.”

Georgia’s businesses are adapting as well. In addition to looking for new international markets and component suppliers, many businesses have changed up how they market their products – and even the products they make – to adapt.

“I think that what we’re seeing is that business is resilient,” Waters says. “Companies are going to find a way.”

In Canton, Smith and his team faced a similar situation, wondering how to keep their staff of 25 busy with slowed international orders. “How do we pivot the business and keep these guys busy and then at the same time try to help the community in this whole fight against COVID-19?” he asked.

The answer: hand sanitizer. Because the company uses flammable, red-label chemicals in its core business manufacturing processes, it already had the infrastructure to offload, mix, handle and store highly flammable alcohol, the main ingredient in hand sanitizer.

“Our employees were already trained on how to handle flammable materials. All the equipment, infrastructure and everything was there,” he says. “It was kind of an easy pivot for us to bring this to fruition.”

From idea to first production batch took about two weeks, Smith says. The company joined a weekly roundtable call set up by GMA to help Georgia businesses connect supplies with demand. Through a connection made on one of these calls, the company has sold more than 700 gallons of sanitizing solution as of press time.

“This is going to turn into a new product line for J&S Chemical,” Smith says. “We’re even investigating other product lines to add that would complement the hand sanitizer.”

J&S Chemical’s success entering a new market with a new product underscores the importance of collaboration, especially in challenging times.

It was through a GDEcD representative’s recommendation that J&S Chemical even joined the call, Smith says, and found its first customer, the Bobby Dodd Institute, a nonprofit that offers workforce programs for individuals with disabilities.

“Without [those two pieces], who knows,” he says. “We could still be twiddling our thumbs here with products and not knowing what to do with it. We would have never probably made the connection to the Bobby Dodd Institute.”

GMA’s weekly calls were intended to help bring industry leaders and organizations together while providing a new meeting ground for the highly active group. The organization’s move toward closer collaboration has been echoed across the manufacturing industries.

“One of the things that we’re really seeing right now is even closer communication and collaboration with our partners,” says Waters, “making sure that we’re getting the resources out [and] our messaging consistent across all the partners about where these resources are located and how companies can tap into these resources.”

The GDEcD’s International Trade Division has also leveraged its digital resources to help state businesses expand into new markets, including a new online tool called the Export Georgia, USA Directory. The free tool launched in February and serves as an online platform for international buyers to search for Georgia suppliers and services.

International trade has seen a fair number of expected – and unprecedented – challenges in recent years, but state leaders are hopeful for a healthy rebound. In fact, they’re expecting it.

“The Georgia Ports is still committed to investing in [the] strategic projects that we have. One of the things we’ve learned in past economies that slowed down, like the Great Recession, is to keep investing the money, because we have to plan on the economy returning to where it is today and going beyond that,” Lynch says. “We can use this time to prepare and handle those volumes that will certainly come our way.”

At the ports, that translates into high-profile projects to boost yard capacity and move more volume. The first phase of the Mason Mega Rail project, which will double the Port of Savannah’s rail capacity, is scheduled to come online at the end of the summer. At the Ocean Terminal, the first phase of renovations to partially convert the terminal to handle containers is expected to be completed at the end of the year. And a berth renovation project at the main Garden City Terminal continues at full speed to allow more high volume ships, says Lynch.

At Hartsfield-Jackson, plans are moving ahead to launch partnership agreements with airports throughout the world to increase cargo volume and passenger numbers; Amsterdam’s Schiphol Airport was the latest to partner with the airport in June 2019. Hartsfield-Jackson is also on track to start development of a public- private partnership for an air cargo terminal that will support the growth of pharmaceutical, aerospace and automotive industries, says Paige.

Yet, setbacks are unavoidable. At the Georgia Ports Authority, Lynch estimates ending the fiscal year slightly under 2019 numbers. For the state as a whole, the impacts are still unclear.

“I think it remains to be seen how deep the drop in global trade is that we have to come back from,” says Waters, “but we continue to be part of a globalized economy. Georgia continues to be at the center of global trade in the U.S. and is very much in the middle of global trade trends. I really don’t see that changing over time.”

This article appears in the July 2020 issue of Georgia Trend.