Over 500 people attended the tours which included everything from food preparation to firearms to golf carts. 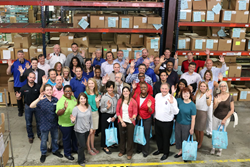 From Alpharetta to Savannah, each region in Georgia was highlighted in the Buy From Georgia Campaign that focused on manufacturers that make consumer products. The campaign kicked off with a tour of Scientific Games on June 27th and ended on July 31st with a tour of Sunny Delight. Over 500 people attended the tours which included everything from food preparation to firearms to golf carts.

“It was fascinating to see the diversity of manufacturing capabilities across so many different segments of manufacturing,” said Jason Moss, CEO of the Georgia Manufacturing Alliance. “The common thread at each facility was the pride that the employees took in creating each product. Although we saw very impressive automation in the factories that we toured, there was a huge focus on continuous improvement using lean and six sigma principles.”....