Chat with us, powered by LiveChat Skip to content 0 Items in your cart View Cart
0 Cart Join Login Contact Us

Governor Nathan Deal Recognizes the Achievements of Jason Moss, CEO of the Georgia Manufacturing All 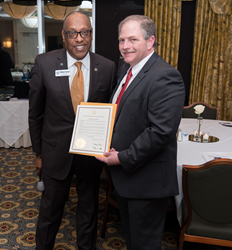 At the Georgia Manufacturing Alliance's Ninth Anniversary Party, the achievements of Jason Moss were recognized in an official Commendation from Governor Nathan Deal.

Since 2008, the Georgia Manufacturing Alliance (GMA) has been supporting the manufacturing community in the state. At their Ninth Anniversary Party, held February 9th at The 1818 Club in Duluth, GA, the achievements of Jason Moss, the founder of GMA were recognized in an official Commendation from Governor Nathan Deal.

“I was honored to address the attendees and to present the Governor’s Commendation recognition to Jason Moss,” said Mr. Melvin Everson, Director of the Georgia Commission of Equal Opportunity. “I met Mr. Moss in 2007, and he shared his vision for creating the Georgia Manufacturing Alliance (GMA). Manufacturing is the backbone of our economy, and GMA has had a tremendous impact on the manufacturing industry in our state.”